Bail (also known as “security”) is the amount determined by the court for a defendant’s release from custody until their trial. Bail is not a fine or punishment but used to ensure defendants will appear for trial and all pretrial hearings. The money used to post bail (generally 10% of the full bail amount) is held as collateral; if the defendant attends all court appointments, the posted bail may be returned to the poster, minus a 15% court processing fee and any fines issued by the judge. If bail is posted in full, the court will waive its processing fee. 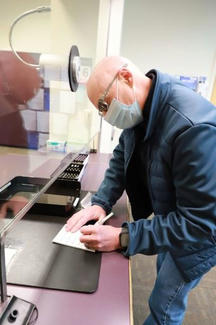 There are two types of bail: Traditional Bail (someone else posts for the AIC) or Self-Bail (AIC posts for themselves.) Generally, only 10% is needed for release –however, if the AIC does not attend all court appointments the posted amount is forfeit and the individual who posted bail may be responsible for the additional 90% of full bail.

Any adult with official government-issued photo identification, except another AIC, may post bail in-person or by mail. *If you choose to post bail, you become responsible for the full bail amount should the AIC miss any court appointments.

If you have cash, you can avoid full bail responsibility by adding it to the AIC’s jail account for them to self-bail, see below for more information.

AICs can post bail for themselves using cash or credit cards in their possession at the time of arrest, or money added to their jail account. Jail staff will help them with the posting process.

Did you know, you can post bail at our office for AICs held at any county jail in Oregon, not just those lodged in Washington County? Contact our Records Unit for more information, 503-846-2700.

To determine an AIC's bail (security) amount, call 503-846-6826 or search for the AIC by name on our Custody List . The security amount shown is the amount that must be paid. This is usually 10% of the full bail amount, however, some traffic violation charges may list and require the total security amount.

For an AIC with multiple criminal charges stemming from a single incident (case number), only the charge with the highest security amount needs to be posted. If there are multiple charges for traffic offenses, like DUII, security of each charge is needed.

Bail amounts may change at any time if the charges are updated or if a court order changes the bail amount. We recommend calling to verify or if you have additional questions, 503-846-6826.