On November 6, 2018, voters approved Measure 26-199 and Oregon Measure 102. These measures provide $652.8 million in resources to the Portland metropolitan region for affordable housing development and allow the funds to be leveraged with additional resources and partnerships. 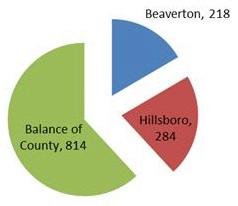 Regulated Affordable Housing = Housing (most often apartment units) generally funded in part by government, available to households earning 60% of the Median Family Income (MFI) and occasionally up to 80% MFI

See the County's summary of affordable housing projects funded by the bond.

View the virtual groundbreaking for the County's Phase I project, The Viewfinder.

Washington County is working with the City of Beaverton, the City of Hillsboro, and Metro for implementation of the bond. To find out more about what these jurisdictions are implementing their bond funds visit these websites:

The Metro Urban Growth Boundary is made up of portions of three counties. Each county contributes a different percentage of property taxes based on how many of the county’s homes fall within the boundary. The intention of the program is to create affordable homes proportionate to revenue raised in each county. Washington County’s portion of the revenue generated through property taxes within the urban growth boundary is 34 percent or $192 million. There are three implementing jurisdictions within Washington County who each have their own share of these funds. The City of Beaverton ($31.8 million), the City of Hillsboro ($41.5 million), and Washington County ($118.9 million).

The bond requires the establishment of a Community Oversight Committee to track the program goals and provide accountability to voters. The distribution of funds is just one of several outcomes that they will track.

The committee is made up of 13 community leaders who cannot be elected officials or have monetary conflicts of interest. The 2019 Metro Council appointed the Community Oversight Committee at the end of January 2019. See information on the committee members.

The funds can be used to:

The majority of Bond funds MUST be used for housing units. Ten percent of the funds generated by the bond will be used by Metro to acquire land that will be developed into affordable housing within the region. Five percent of the funds will be set aside for administrative costs. This allows local entities to hire the staff required to implement the plans they are developing.

The unit goals identified in the prior section labeled “Overview” will be the driving force behind the type of housing to be built. Additionally, the County’s LIS will include input from the community as we work to identify local priorities which must be aligned with the following core values laid out in Metro’s Bond framework:

There is much work to do before housing can actually be built. Metro has set a goal for the implementation plans to be approved by August 2019, with the targeted dates as follows: