A megathrust earthquake fault in our backyard 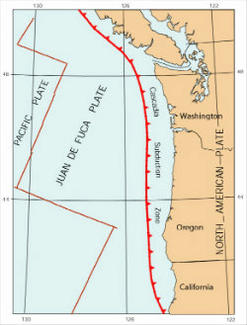 The Cascadia Subduction Zone is a roughly north-south oriented megathrust earthquake fault that exists offshore from Cape Mendocino, California, to Vancouver Island, British Columbia, and is roughly 700 miles [1,130 km] long. It is capable of generating a "great earthquake" of magnitude 9.0, which is comparable to some of the most powerful and violent earthquakes observed anywhere on Earth. Examples of recent subduction zone earthquakes include the 2011 Tohoku, Japan, earthquake, a magnitude 9.0, and the Northern Sumatra earthquake of 2004, a magnitude 9.1. Currently, the Cascadia Subduction Zone is locked by friction and slowly building strain. When it ruptures, a very powerful and damaging earthquake and subsequent tsunami will be generated.

The Cascadia Subduction Zone has a history of producing very powerful earthquakes. The last known earthquake occurred on January 26, 1700, at around 9:30 pm. The date is accurately known because the tsunami it generated was recorded by coastal residents in Japan. Scientific research suggests this was a magnitude 9.0 earthquake. For more information about how scientists identified the 1700 earthquake, read The Orphan Tsunami published by the U.S. Geological Survey (USGS).

The Cascadia Subduction Zone is capable of generating a devastating earthquake at any time. On average, the zone produces a 9.0 or larger magnitude earthquake about every 400 to 600 years, although intervals have been as low as 200 years and as high as 1,000 years. The southern end of the zone has historically been more active than the northern. A study published online by the USGS indicates the southern portion of the zone has earthquakes on average every 240 years and has a 40% chance of a major earthquake (8.0 to 8.5) in the next 50 years. According to the Oregon Resilience Plan, there is a 7-15% chance of a magnitude 9.0 earthquake within the next 50 years. Watch this great video on the Cascadia Subduction Zone earthquake threat produced by the Oregon Department of Geology and Mineral Industries.

According to the Oregon Resilience Plan, damages from a Cascadia Subduction Zone earthquake in the Pacific Northwest will be unprecedented. Total economic losses in Oregon are projected to exceed $32 billion (close to one-fifth of Oregon's gross state product). Fatalities in Oregon may range from 650 to 5,000, and over 27,000 may be displaced from their homes. Completely destroyed buildings could reach 24,000 with another 85,000 sustaining extensive damage and requiring months to years to repair. Essential services in Washington County will likely be offline for extended periods of time – water and sewer systems for one month to one year, electricity for one to three months, police and fire stations for two to four months, top-priority highways from six to twelve months, and healthcare facilities for 18 months. Additionally, major disruptions to fuel supply and telecommunications are expected.