The Pacific Northwest is the second most earthquake vulnerable location in the United States. Here in Washington County, we are vulnerable to earthquakes from two primary sources – the Cascadia Subduction Zone and local fault zones. 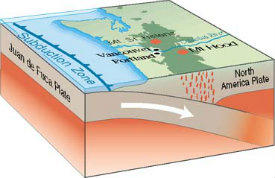 Plate tectonics teach us that the Earth's crust is made up of large fractured plates of rock that are in constant motion. Oregon resides on the North American Plate while just offshore is the Juan de Fuca Plate, which is moving toward and under the North American Plate at roughly the same rate that your fingernails grow. This process is known as subduction and the boundary between the plates is known as the Cascadia Subduction Zone.

Two types of earthquakes threaten Washington County as a result of the Juan de Fuca Plate subducting beneath the North American Plate – Cascadia Megathrust and Crustal. The Cascadia Subduction Zone is capable of rupturing and generating a "megathrust earthquake," an earthquake of magnitude 8.0 to 9.0 or larger. Three active local faults zones, consisting of shallow crustal faults, exist in proximity to Washington County – the Portland Hills fault zone beneath the Portland metropolitan area, the Gales Creek fault zone along the east flank of the Coast Range, and the Mount Angel fault zone in the northern Willamette Valley. These local fault zones can experience earthquakes of magnitudes as high as 6.8 to 7.2.

Types of damage that occur during an earthquake

Earthquakes produce damages from ground shaking and liquefaction of soils, and from landslides and slope failures. Intense and prolonged ground shaking will cause significant damages in Washington County. In residential settings, wooden frame structures tend to incur minimal damages provided they are bolted to their foundations. Structures in commercial and industrial settings built before modern seismic building codes, which in Oregon were adopted in 1993, tend to have higher levels of damage – particularly unreinforced masonry buildings and non-ductile concrete structures, which are buildings held up by non-reinforced or poorly reinforced concrete pillars and shear walls. Examples include department stores, schools, parking structures, office buildings, and big-box stores.

Liquefaction is a process that occurs when saturated soil is subjected to prolonged and intense shaking causing it to behave like a liquid. When it occurs, soils tend to settle and shift causing roads to fracture, buildings to tip and shift, vehicles to sink, and buried infrastructure (like pipelines, fuel tanks, and septic systems) to become buoyant and break. The soils within the Tualatin Valley of Washington County are highly susceptible to liquefaction; therefore, it is anticipated that significant damage to infrastructure and structures will occur during the next big earthquake.