1/9/2023: We are preparing for the bidding and construction phase. 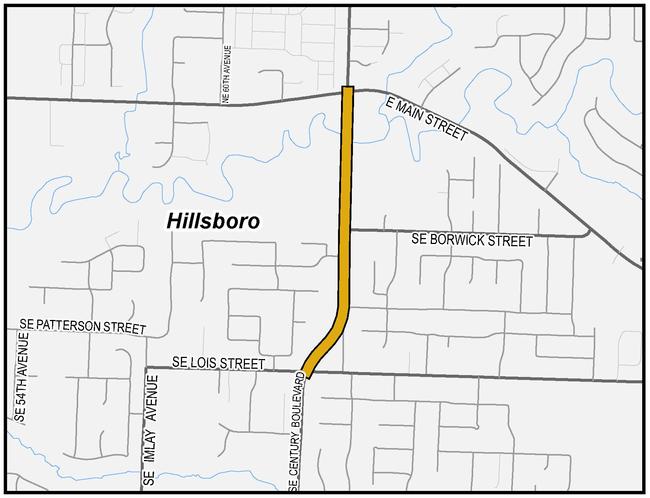 This project has been included in the city of Hillsboro’s Transportation System Plan (TSP) since 1999. It is one of four projects selected to increase access to jobs in the north part of the city and housing to the south:

Traffic models show that 185th Avenue, Cornelius Pass Road and Brookwood Parkway are not enough to meet future travel demands of the area.

Public feedback was collected during phase of project selection and design:

It also provides a needed bicycle connection to Main Street, decreasing travel time for those who walk their bikes through Noble Woods.

Models project traffic on Century Boulevard between Main Street and Cornell Road will increase by 15-20% when the bridge opens. This is about one additional vehicle per minute in each direction.

When South Hillsboro is fully built traffic on this section of road is expected to be 25-30% more than in 2019, about two additional vehicles per minute in each direction.

The impacts to the park entrance are being coordinated with the City of Hillsboro Parks & Recreation Department. A Rapid Flashing Beacon will be installed at Borwick Street.

A noise study will be conducted to determine expected noise impacts.

The Dark Sky-compliant LED streetlights will be at a frequency that will not disturb nocturnal animals.

A total of 47 trees are expected to be impacted by the project:

We will install at least 60 trees and shrubs in the project area. We are coordinated with the Hillsboro Parks & Recreation Department (HPRD) to plant additional trees in front of Noble Woods Park. We are investigating additional planting locations.

A wetland survey has been conducted and sent to the Department of State Lands for review. There is a possibility that the project may not impact any wetlands, but it could have minimal wetland impacts.

Any impacts will be mitigated within the existing drainage basin.

Possible deterrents are being investigated.

Development is unrelated to the road project. For more information, contact Hillsboro’s Planning Department at 503-681-6153.

Traffic signals on Century Boulevard at the light-rail crossing and at Cherry Drive are a single system. The signals respond together to pedestrians, trains and vehicles to prevent safety issues.

Hillsboro updated the traffic signals in 2019 to allow for more complex timing. The city will modify the timing with changes in traffic volume. The city is aware of traffic backups when two light-rail trains cross Century Boulevard in a short period of time and is working with TriMet to minimize backups safely.

Hillsboro and Washington County are making improvements to encourage commuters to use Cornelius Pass Road and Brookwood Avenue.

Hillsboro must follow federal rules and state laws when determining where to install traffic lights and crossing enhancements, such as marked crosswalks and Rectangular Rapid Flashing Beacons (RRFB). An engineering study is completed to determine safety improvements.

A crosswalk with a Rectangular Rapid Flashing Beacon (RRFB) will be installed at Century Boulevard and Borwick Street intersection.

Hillsboro is in discussion with the Oregon Department of Transportation (ODOT) to install a traffic signal at the SE Imlay and Tualatin Valley Highway intersection.

Intersections with Century Boulevard studied, but not meeting the requirements for enhancements are:

If conditions change, improvements will be are prioritized alongside other locations throughout the city.

The Orenco Townsite Area falls within the Orenco Station Community Planning Area which has community-specific development regulations and design standards that were developed with involvement of community members. The purpose of the regulations and standards is to conserve the historical and cultural significance of the area of the original community of Orenco preserving and restoring the plat plan and site layout of the original 1908 community and its 1911 addition.

The TSP does not call for any additional lanes, however dedicated turn lanes could be added at signalized intersections if needed to improve traffic flow.